If your curiosity has gotten the better of you or you are concerned about the paternal father of your dog’s litter, then you might be wondering whether or not a dog can become pregnant by more than one other dog.

So, can a dog get pregnant by more than one dog?

The answer can be more complicated than you might think but I attempt to answer it below after spending 20hrs researching the view of top Veterinarians across the country...

Can Dogs Get Pregnant by More Than One Dog?

The quick and simple answer to this question is yes; they can.

You might be surprised to learn that female dogs can, in fact, become impregnated by more than one other dog in certain circumstances.

It isn’t a common occurrence, but it definitely can happen at times, and there could be more than one father to your dog’s litter. We will explain how this can happen below.

Sperm can actually remain viable in the female reproductive tract for up to seven days, and the female doesn’t actually have to ovulate on the day that she is mated in order to become pregnant.

Due to the fact that the sperm is still viable, she can become pregnant by this sperm multiple days later.

There is a lot of flexibility in the timing of fertilization, and while most might think that the process happens straight away, it can also take some time to happen.

Therefore, if your female dog has mated with two dogs in a short period of time, there could be two lots of sperm inside her reproductive tract that are viable. In such an instance, both of these sperm could end up fertilizing an egg.

Looking into this further can help you to understand the process better. Essentially, your dog will come into heat twice a year, and each time, this can last around 3-4 weeks.

She will bleed for the first seven to ten days, and in this time will likely not be interested in mating with another dog.

Between day five and day ten is the time in which she will be ovulating, and this is the point in time where she will be willing to mate with another dog.

During this time, she will be able to fall pregnant, and after this period, she will slowly start to come out of heat.

The ovulation can occur at any time between these central five to ten days, and if the female dog has mated with more than one dog during this period, it is possible for both of them to father the litter.

If she has mated with two dogs on the same day, essentially, it becomes a race to see which sperm can fertilize the egg first.

This is because of the fact that sperm can survive for many days in her reproductive tract, and it will be waiting for the time in which she is ovulating. 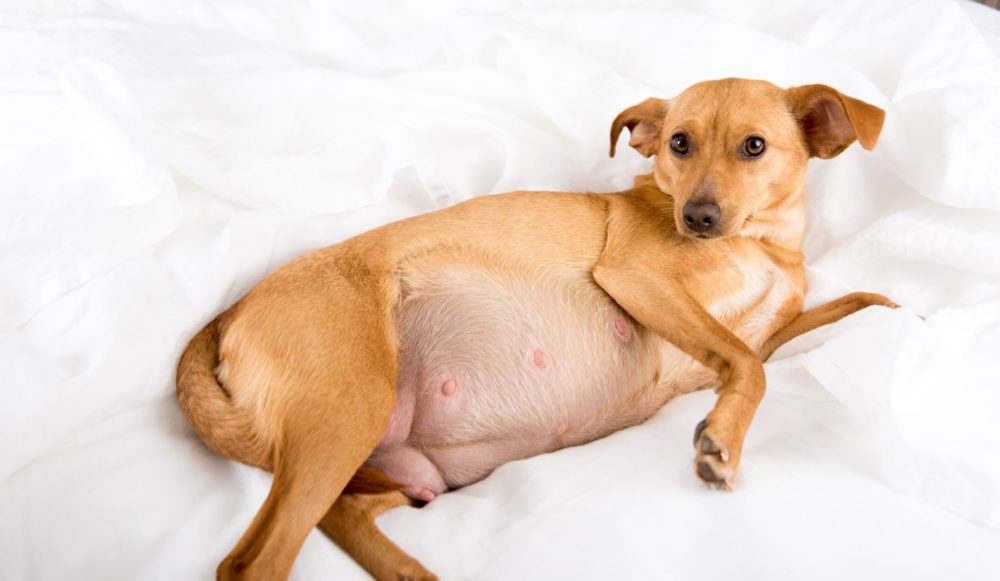 How Can I Prevent My Dog Getting Pregnant By Two Other Dogs?

Well, of course, accidents can happen, and if you are leaving your female dog unsupervised around other male dogs when she is in heat, then you are opening yourself up for these accidents to occur.

It is natural for other male dogs to be attracted to her when she is in heat, and it is more than likely that they will mate.

You cannot undo this process once it already happens, and your only hope is to wait and see what happens, but there is the chance that they could become pregnant by both dogs.

Unfortunately, the deed has already been done, and there is nothing that you can do to stop it.

To avoid this happening, we recommend that you keep your dog on a lead if you are taking her for walks when she is in heat, so you can better keep an eye on her.

If you don’t want your female to become pregnant at all, then you should consider getting her spayed to stop this from ever happening.

A female dog that has been spayed will not be able to get pregnant at all, which can avoid this issue entirely.

If you have a female and a male dog, then you might want to keep them separated when they are not being monitored during the time in which she is in heat. This will ensure that she does not get pregnant by your other dog.

Is it Dangerous for my Dog to Become Pregnant by Two Other Dogs?

Generally, if the female dog is healthy enough to become pregnant by two different dogs that are of a similar or smaller size, it is unlikely to cause any issues at all.

However, if your small dog has become pregnant by a father that is much bigger, then the mother may have some difficulties carrying the larger pups.

This can also make the birth more difficult and complicated.

The same can also be said for pups that are a breed that typically has a bigger head, and this can also cause dangerous complications during birth, and she may struggle to give birth naturally without the help of a veterinarian present.

What Veterinarians Recommend As The Best Dog Foods to Prevent Gas

These Are The Best Dog Foods for Shedding (Because Let’s Be Honest, Shedding Is Annoying!)

Research Shows These Are The 3 Best Peanut Butters For Dogs

The Best Electronic Dog Door So Your Best Friend Can Come And Go As He Pleases Without Any Security Risk
We use cookies on our website to give you the most relevant experience by remembering your preferences and repeat visits. By clicking “Accept”, you consent to the use of ALL the cookies.
Cookie settingsACCEPT
Manage consent