If you have ever had the stomach flu, then you will be able to identify the symptoms easily. No one likes being sick, and unfortunately you can be nauseous, unwell or even throw up for days on end.

Most of the time, contracting a stomach virus will usually happen because of something you ate, or bacteria that you ingested which can upset the delicate nature of your stomach. This can result in many bathroom trips and leave you feeling sick and groggy for days.

Sometimes, even the rest of the household can contract the stomach virus with you, especially if you ate the same things, or are suffering from a stomach bug. 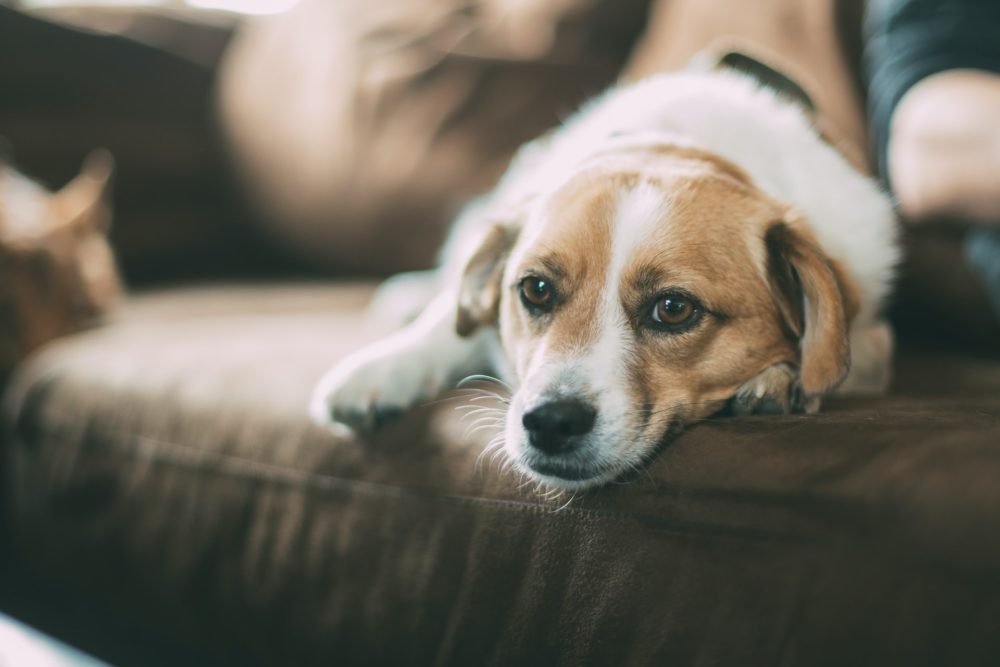 A stomach virus can also be called the stomach flu or gastroenteritis. The typical symptoms of a stomach virus will be sickness, vomiting, diarrhea, loss of appetite, a fever, and the general feeling of being unwell and under the weather.

You may also experience a loss of energy, but this is most likely due to the fact you will be unable to eat, or may have vomited so much that you feel weak.

When you have a stomach virus, you may even find that your dog is suffering from the same symptoms. Although it could be a pure coincidence, it can make you wonder, can a dog catch a stomach virus from a human?

Can a dog catch a stomach virus from a human?

There is a lot of debate in the question as to whether a dog can contract a stomach virus from a human and vice versa. However, a recent study has found that similar Norovirus strains can create severe symptoms of stomach flu in both humans and dogs.

This study was conducted by testing the stool samples of both humans and dogs from the same households who were suffering from symptoms of gastroenteritis, or a stomach virus. In four of ninety-two samples, the same norovirus was found in both the human and the dog samples.

Despite being such a small percentage, there was evidence that the dog can suffer the same symptoms from the same norovirus as its human.

However, it could mean that both the human and the dog simply ate the same food, or ingested the same type of parasites as the human, and so they would both be suffering from the same stomach virus.

However, both humans and dogs can catch a stomach virus or gastroenteritis from a variety of different sources, whether it was improperly cooked food, medications, contaminated water, or bacteria and parasites within their environment.

Depending on how you became unwell, your stomach virus can be contagious to people, and can spread quickly and easily, but can often simply run its course through you.

If your dog is suffering from similar symptoms to you, then they may be more acute symptoms or lesser versions of the stomach virus.

Other studies have suggested that dogs have been infected by human stomach viruses, or norovirus as a few dogs in the research had antibodies of the virus found within their bodies. This goes to show that they may have at some point suffered a few symptoms or been exposed to the human stomach virus.

However, it is very few and far between, and many scientists still maintain that humans and dogs cannot pass viruses and flus between each other. They can, however, suffer similar or lesser symptoms of the same health problems.

How to Tell If Your Dog has a Stomach Virus

If you believe that your dog is suffering from a stomach virus, then there are a few telltale signs that you can look out for.

The most common symptoms of gastroenteritis are lack of appetite, severe vomiting, diarrhea, dehydration, tiredness, or even some blood within their feces or vomit.

Dogs can often vomit or have symptoms of diarrhea, which is usually quite normal, however if the symptoms seem extreme or persist, then it may be something more severe.

These symptoms may reveal themselves because of dietary problems, parasites, harmful bacteria, transmission of norovirus, or contact with infected surfaces, foods, or water.

If you begin to notice these symptoms, then it is best to contact a veterinarian or professional.

What to Do If Your Dog has a Stomach Virus

If you are quite sure that your dog’s symptoms are out of the ordinary, and not just regular sickness and diarrhea, then it may be a stomach virus.

If this is the case, then you should seek the advice or help of your dog’s veterinarian, or a professional. The veterinarian will most likely ask you a variety of questions pertaining to your dog’s diet, what they may have eaten recently, or in the past 48 hours.

In addition, they may ask if the dog has been exposed to anyone else with symptoms of gastroenteritis, or if the dog is on any new or different medications. This will help them diagnose the problem, or the stomach virus so that you can help your furry friend.

The main issue with stomach viruses is that they can cause extreme dehydration because your dog will be losing a lot of fluids (with the vomiting and diarrhea) and may be unable to keep food or drink down.

You may have to withdraw food for a few days until the symptoms cease, as long as your veterinarian has told you to do so. However, you will want to ensure that your dog is properly hydrated and try to restore fluids and electrolytes into your dog’s body to nurse them back to health.

If the symptoms are due to a bacterial infection, then the veterinarian may prescribe medication or antibiotics to get your best bud back to normal! In addition, the vet may provide a remedy to calm the symptoms of diarrhea or prevent it from happening.

Generally, your dog is as strong as an ox, and will recover quickly if kept hydrated. However, in the event that your dog is not recovering quickly, then you may have to take your dog to the veterinarian for further inspection and diagnosis to treat the problem.